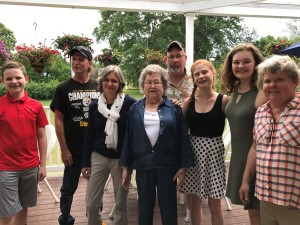 Shirley Jean Dietz, age 81, passed away peacefully on Wednesday, April 14, 2021 with her loving family by her side.

Born in Douglas, WV, Shirley was the daughter of the late James and Dorothy (Coffman) Wardrope. She graduated from Swissvale High School Class of 1958 in Pittsburgh, PA. In 1978, Shirley began her 25 year career in telecommunications at Bell Telephone in Wilmington before moving to AT & T in Philadelphia. She eventually transitioned to a manager position at Verizon in Philadelphia until her retirement in 2003.

A devoted and steadfast mother, grandmother, and great-grandmother, family was the center of Shirley’s world, and she celebrated and supported her children and grandchildren through thick and thin. Her children and grands are quick to mention how selfless and self-sacrificing she was. In her final days and hours, she made sure that each of her children and grandchildren knew how loved they were and reminded each of them of their own special and unique best qualities. Quite simply, she died as she lived, more concerned for others than she was for herself. She was a strong, fiercely independent woman who treasured her family, her Catholic faith, and close friends. She taught us all that we would be just fine as long as we had these three things to sustain us through the good times and the bad.

Shirley was proud of her Scottish heritage as her father came to the U.S. from Dunfermline, Scotland. As a teenager accomplished in Scottish Highland dancing, she participated in Scottish dancing competitions, winning 18 medals by the age of 15. Her talents were featured in the local Pittsburgh newspaper. She danced while her father, a prolific and talented bagpiper, played the bagpipes for her. In later years, Shirley loved attending the Scottish Games with her family.

An outgoing and nurturing person, Shirley enjoyed activities that allowed her to share her love of food, music, and Pittsburgh Steelers football with her family and friends. A talented cook and baker, she shared her confections and recipes with family and friends, and her family will miss her amazing cinnamon rolls and Scottish shortbread cookies among her many other signature dishes. She was always making sure that others were nourished and well-fed. A “foodie” who loved to travel to New York City, Shirley spent much quality time with her best friend, Loretta Eller, making yearly pilgrimages to Las Vegas. On Sundays in the fall, you could find Shirley cheering on her Pittsburgh Steelers team. An avid Steelers fan, she shared this love with her family, and especially her grandson, Jacob.

Shirley is survived by her children, John A. Dietz and his wife, Michele, Beth L. Dietz and her wife, Tammy Allen, Dayna M. Haraczka, and James “Uncle Buck” Dietz; her five grandchildren, Gail, Ashley, Jonathan, Carissa and Jacob; and her two great grandchildren, Bodie and Crosby. She was predeceased by her parents and her son-in-law, Thomas J. Haraczka.

Services will be held privately.

In lieu of flowers, memorial contributions may be made in Shirley’s memory to the Epilepsy Foundation Eastern Pennsylvania, 919 Walnut St., Suite #700, Philadelphia, PA 19107-5237.

To send flowers to the family or plant a tree in memory of Shirley Jean (Wardrope) Dietz, please visit our floral store.