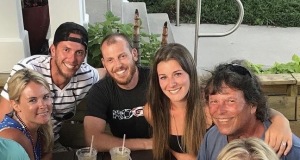 Born in Wilmington, Kevin is the son of Henry S. and the late Patricia A. (Morris) Krajewski. He was a graduate of McKean High School Class of 1977, as well as Delaware Technical Community College where he received an Associate's Degree in Criminal Justice. Before retiring in 2002, Kevin was a professional painter for many years.

Kevin’s greatest accomplishment was raising his two boys, Brian and Patrick with his wife Cindy. Kevin was a devoted father, who was always quick to talk about his sons whenever the opportunity came along. In addition to being a tremendous father Kevin was equally as proud when he became Pawpaw to his granddaughter, Kinsley Ann. Known for being someone who could talk to anyone and make friends in any situation, Kevin always enjoyed telling the same stories over and over again to anyone who was fortunate enough to end up in his company.

Kevin's passion was training Labrador and Chesapeake Bay Retrievers to perform in field hunt trials. He was a member of many retriever clubs including the Pinelands Retriever Club of New Jersey.

There was no place Kevin was more at home than on the water, whether he was on his boat crabbing, fishing, or duck hunting. Many family memories will be treasured from the annual family trips to St. Michael's, where family and friends would gather along the rivers of the Chesapeake Bay.

In earlier years when his sons were playing ice hockey, Kevin was his sons biggest fan. The family traveled all over to hockey games and Lake Placid was one of their favorite places to play each year. At every game, Kevin could be found in the same spot, no matter the rink, cheering his sons on from behind the opposing team’s net.

Family and friends may visit from 5:00 to 7:00 PM on Thursday, July 30 at Parkview Assembly of God, 235 Polly Drummond Hill Rd., Newark, DE 19711, where a Celebration of Kevin's Life will begin at 7pm under the tent. In keeping with Kevin's carefree spirit, the family would love for everyone to come in casual attire.

Funeral services will be conducted under COVID-19 guidelines, which includes face masks and social distancing.

To send flowers to the family or plant a tree in memory of Kevin G. Krajewski, please visit our floral store.